Our Future Started Over 130 Years Ago

North Carolina State University is a Land Grant Institution founded in 1887. Established under the 1862 Morrill Land-Grant Act, it was argued that “NC State will provide a ‘liberal and practical education’ while focusing on military tactics, agriculture and mechanical arts without excluding classical studies.”

Under considerable pressure and not without controversy, the General Assembly passed the act which authorized the establishment of the North Carolina College of Agriculture and Mechanic Arts on March 7, 1887.

The brand-new school held its first classes in the fall of 1889 with 72 students, six faculty members and one building.

Courses in agriculture, horticulture, pure and agricultural chemistry, English and bookkeeping, and mathematics and practical mechanics were offered. 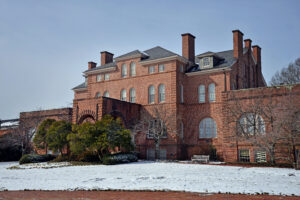 The building behind the Bell Tower, now Holladay Hall, was originally known as Main Building.

It was the first and only building on campus when the doors opened on October 3, 1889.

The cornerstone was laid in August 1888; almost one year later while still under construction, most of the building was damaged by fire before it could open. There are many tales of suspicion around the cause of the fire, to include disgruntled ghosts.

The original Main Building housed all of the college’s activities during its first year: kitchen, dining-hall, shop, and gym in the basement; offices, classrooms, and library on the first floor; and dormitory facilities for the first 72 students on the second and third floors.

The name of Main Building was officially changed in 1915 to Holladay Hall after Colonel Alexander Quarles Holladay, the first President for the College (1889-1899). 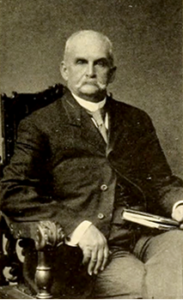 Today the building is a registered North Carolina historical site and serves as the office building for several campus administrators to include the Chancellor.

Want to know more? Scroll through the Historical Timeline of Campus buildings, grounds and landmarks.

Explore the NC State Memorial Belltower with a Virtual Tour

History of the Memorial Bell Tower
War and Remembrance

History of the Memorial Bell Tower
Light it Red

History of the Memorial Bell Tower
The Bells

Explore more about this Legend in Stone

The 50-Year Evolution of the NC State Student Center